A summary of our 2019 regional air quality monitoring results show that overall, the Air Quality Health Index (AQHI) risk to health rating in the region was significantly lower in 2019 when compared to 2018.  In 2019, there were 177 hours of high or very high risk ratings. In 2018, the number was 849. The 2018 annual total was largely influenced by poor air quality conditions in August of that year caused by wildfire smoke, predominantly coming from British Columbia.

Seven of FAP’s 10 continuous monitoring stations collect data used to calculate an hourly and forecast AQHI in and around Alberta’s Industrial Heartland.  The AQHI describes the level of health risk associated with an index number. The higher the index number, the greater the health risks. The risk levels are further categorized as low, moderate, high or very high. Risk to health increases as the index level rises.

More than half (58%) of the 2019 high and very high risk ratings were caused by wildfire smoke that occurred in late May and early June. The second most frequent cause (25%) of high or very high ratings in 2019 was wintertime temperature inversions.

During 2019, there were 191 occurrences across FAP’s ten monitoring stations where air quality measurements exceeded Alberta’s Ambient Air Quality Objectives. There were various causes for these exceedances, but the majority (60%) were due to high concentrations of Fine Particulate Matter (PM2.5) caused by wildfire smoke. Exceedances recorded for other substances were attributed to wintertime temperature inversions, summertime smog, local industry or were undetermined.

We’ve posted the details regarding the 2019 air quality monitoring results and an updated five year trend of local AQHI ratings on the Reports page of our website.

FAP’s 2019 fourth quarter Air Quality Health Index (AQHI) results show that there was only one hour of a high rating and no very high ratings. The one hour of high rating occurred at our Gibbons air monitoring station. There were no exceedances of the 24 hour ambient objectives in Q4 of 2019 and only two one-hour exceedences, one involving fine particulate matter and one involving hydrogen sulfide. The causes were both undetermined. Read the full Q4 report. 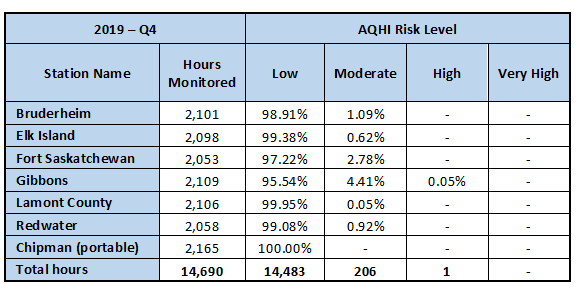 As a comparison, the next table shows the results from the fourth quarter of 2018.