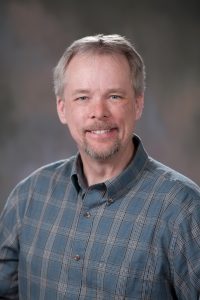 resident Allan Wesley was elected Fort Air Partnership’s (FAP) new Chair at its AGM on May 8. He replaces Keith Purves, who stepped down from the position but remains as Vice-chair.

Wesley is a Decision Sciences instructor at Grant MacEwan University who holds degrees in Finance, Actuarial Science and Economics. A Fort Saskatchewan resident, Allan joined the FAP Board in 2015 as a public member because he was interested in the process of collecting air quality data and communicating that data to the public in a meaningful way.

“Fort Air Partnership plays a very important role regionally and provincial because we produce the data that so many people and organizations rely on for programming, to do planning and policy development, to conduct research, and to scientifically understand the quality of the air we breathe,” said Wesley.

Allan has found his work with FAP has re-energized his passion for teaching about the application of measurement and data in the real world. He welcomes the opportunity and challenge of becoming Board Chair, noting FAP has a very strong Board and great staff support.

At the AGM, Mike Fedunec was elected Secretary-Treasurer. Fedunec is an Environment, Health and Safety Manager at Agrium and a Northeast Capital Industrial Association industry representative. Confirmed as new Board members were Fort Saskatchewan resident Martin Mudryk as a public member, and Greg Norum as a returning public board member.

The FAP Board of Director is composed of eight public, four government and three industry members. See a complete listing with biographies of all Board members.

Fort Air Partnership has embarked on a consultation process that will create a blueprint for our future growth and development. Called Vision 2030, it is important to us that our stakeholders have a chance to provide input into this process.

To help guide that input, we have created a Vision 2030 Consultation Discussion Guide. There are many ways to participate. Starting at our AGM on May 8 and continuing over the next few months, we will be hosting roundtable discussions and inviting organizations to respond to the questions in the Guide. Those who are unable to attend a face-to-face session, including members of the public, are encouraged to review the Guide and provide their input to us in writing.

Following the consultation, we will report back on what we heard. The Board will consider the input through a number of lenses such as feasibility, desirability, funding and other factors and use that information to help guide the organization’s future direction and activities.

It is important, however, for us to mention and stakeholders to know that any new initiatives or services that Fort Air Partnership may employ will be contingent on identifying sufficient and sustainable funding for development and operational support.