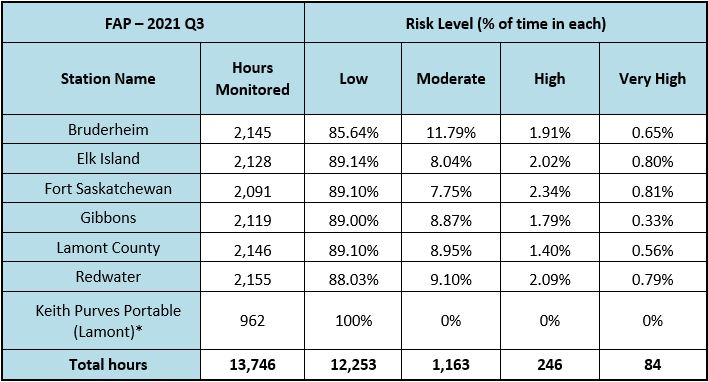 As a comparison, results from the third quarter of 2020 were:

A monitoring study that examined a type of hydrocarbon known as Volatile Organic Compounds (VOCs) in the Bruderheim area shows that levels measured during the study did not exceed established provincial objectives.

The project was conducted in two separate phases (Phase 1 ran from October 2014 to March 2015 and Phase 2 ran from July 2017 to July 2018). Subsequent measurements of the VOCs studied during the research project shows no discernable trend changes, either up or down, for the past five years. The research study was conducted in response to recommendations from a network assessment conducted on the FAP network in 2012, as well as to address questions raised by residents in and around Bruderheim regarding the impact on air quality of emissions from oil and gas installations in the area.

During the research project term, almost all 24-hour samples contained pentane, butane, propylene, n-hexane and methylcyclohexane. These VOCs have in previous North American studies been associated with gas or vapor emissions from pressurized equipment due to leaks and other unintended or irregular releases from the production and storage of petroleum-based products.

In addition to this general observation, a few samples contained complex mixtures of VOCs or at times very few VOCs. While the study results indicate multiple possible source types, and the Bruderheim station (located in town) is in an area with various sources that are known to emit hydrocarbons into the atmosphere, VOCs measured during the study did not exceed established Alberta Ambient Air Quality Objectives (AAAQOs), nor Texas Air Monitoring Comparison Values (AMCVs).

Please click the following for a summary of the report and the full report.