FAP’s 2019 third quarter Air Quality Health Index (AQHI) results show that, for the first time since 2015, there were no high or very high AQHI results for an entire calendar quarter.  Overall air quality in and around Alberta’s Industrial Heartland was of low risk to health nearly 100% of the time from July 1 to September 30, 2019. Only air monitoring stations at Fort Saskatchewan and Gibbons recorded moderate AQHI results during Q3. The Government of Alberta calculates the AQHI using data collected at seven of FAP’s air monitoring stations.

As a comparison, the next table shows the results from the third quarter of 2018. The major difference in results between the third quarters of 2019 and 2018 can be attributed to the impact of smoke from wildfires for the majority of August in 2018. See a complete summary of Q3 2019 results including all exceedances. 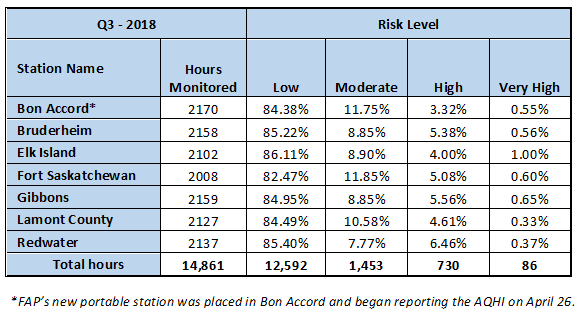